Here’s a Reminder of What’s at Stake:

This has been on my mind and I felt a need to post this because not many are aware of the whole picture as to why the Democratic Party is pushing their socialistic ideas and the reasons behind their drive to make the USA a socialist country! The list of 45 goals of Communism found their way down the halls of our great Capitol back in 1963. As you read this, 57 years later, you’ll be shocked by the events that have played themselves out already! 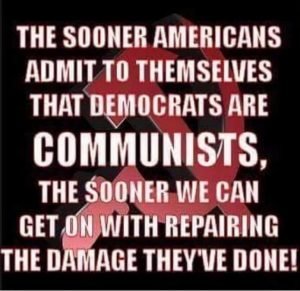 Much of this is written by Capt Joseph R. John, which you can look up on line. The goal of the Communist Party USA is to remove President Donald J. Trump from office in the November election, so the elected Socialists, Marxists, and Communists in the Biden administration can change the government of the US Constitution Republic into the Socialist Republic of America. Marxist Tom Perez, who leads the new Socialist Democrat Party, and the 45 elected Socialists, Marxists, Progressives, and Communists in Pelosi’s Democrat Congressional Caucus have many of the same goals as the Communist Party USA, their collective goal is to fundamentally change the US Constitutional Republic.
The Socialist Democrat Party has many of the same below listed goals that the Communist Party USA has in order to destroy the United States:
You can find the complete list of the ‘45 goals of the Communist Party’ in researcher Cleon Skousen’s book: “The Naked Communist.” The list can also be found on line.
I hope this helps to explain what is and has been happening in our country. I hope and pray you all keep safe during this Christmas time of year.