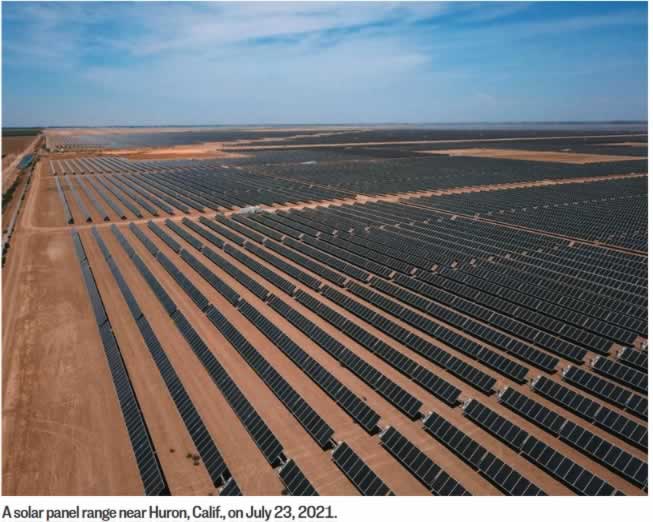 President Joe Biden keeps claiming that wind and solar energy are going to save money for consumers. But more government subsidies to “renewable energy” is a key feature of the White House anti-inflation strategy recently announced by Biden.

He probably got that idea from John Kerry, the administration’s climate czar, who recently claimed that “solar and wind are less expensive than coal or oil or gas.” Pete Buttigieg, the Biden Transportation secretary, makes the same claims about the thousands of dollars that motorists can save if they buy electric cars.

This couldn’t be more wrong.

Proponents of “green” energy boondoggles are often masters at playing with the numbers, because that is the only way that wind and solar electricity generation make any sense. Advocates such as Kerry love to focus on the low operating costs of solar and wind since they don’t require constant purchases of fuel. Ignoring the relatively short lifespan of solar and wind components, as well as the high initial investment, can make it appear as though solar and wind operate at lower costs than fossil fuels or nuclear power.

Let’s get the facts straight. The cost isn’t just what you pay at the retail level for gas or power. It also includes the taxes you pay to subsidize the power. A 2017 study by the Department of Energy found that for every dollar of government subsidy per BTU unit of energy produced from fossil fuels, wind and solar get at least $10.

That’s anything but a money saver.

The reason the subsidies are so high is that solar and wind have additional costs compared to their more reliable competition. “Green” energy sources are non-dispatchable, meaning their output can’t be changed to match demand. The wind doesn’t blow harder, and the sun doesn’t shine brighter, just because electricity use is peaking.

Conversely, fossil fuel entities—such as a coal plant—can ramp up generation when we need it most and ramp down when demand falls.

Widespread adoption of solar and wind generation would necessitate expensive batteries on a large scale to ensure that people still have power when the wind stops blowing or when the sun stops shining—like it does every single night.

So, unlike reliable and flexible natural gas, solar and wind require large-scale storage solutions: massive banks of batteries that are hardly environmentally friendly but are also extremely expensive. And since batteries don’t last forever, they add to both the initial expense and maintenance costs during the life of a solar or wind energy generating station.

The same problem exists with electric cars. The sticker price on EVs is considerably higher than for conventional gas-operated cars, and the so-called savings over time assume that the electric power for recharging is free. But it isn’t and power costs are rising almost as fast as gas prices.

Factors such as these are consistently ignored by Kerry and other “green” energy activists.

To genuinely evaluate dissimilar energy sources and provide an apples-to-apples comparison, the U.S. Energy Information Administration uses the Levelized Cost of Energy (LCOE) and the Levelized Cost of Storage (LCOS). These measures consider the initial costs, the lifespan of generation and storage systems, maintenance and fuel costs, decommissioning expenses, subsidies, etc., and compare that to how much electricity is produced over a power plant’s lifetime.

The numbers don’t lie: “green” energy is a complete waste of resources.

Imagine paying four to six times as much every month for the same electricity! That’s the green paradise world that the Biden administration wants for America.

Yet, it’s even worse than that because electric power costs greatly affect the cost of producing nearly everything else. In the case of producing aluminum, for example, a third of the total production cost is electricity alone.

Imagine what quadrupling electricity prices would do to the prices of all the goods and services that people buy. If you think inflation is bad now, just wait until the nation is dependent on wind and solar—then you’ll see REAL price increases.

And despite official government data contradicting their own claims, the Biden administration—including Kerry—continues spouting simple untruths on wind and solar. They hope that no one will check their fantastic facts.

To the left, wanting it to be true, makes it true.

All the while, the middle class is being crushed by $4-a-gallon gasoline and businesses everywhere are buckling under $5-per-gallon diesel. The Wall Street Journal warns that electric power blackouts could be coming because of overreliance on wind and solar power.

At some point, if this push for green energy continues, the whole nation will start to look like California, where gas is $6 a gallon, the lights go out, and electric cars are stranded because of rolling blackouts.  If that’s our “green” future, then Americans should want nothing to do with it.

Stephen Moore is a distinguished fellow in economics at the Heritage Foundation, and E.J. Antoni is a research fellow in Heritage’s Center for Data Analysis. Moore is a co-founder of the Committee to Unleash Prosperity, where Antoni is a senior fellow.

Views expressed in this article are the opinions of the author and do not necessarily reflect the views of The Epoch Times or Zero Hedge.