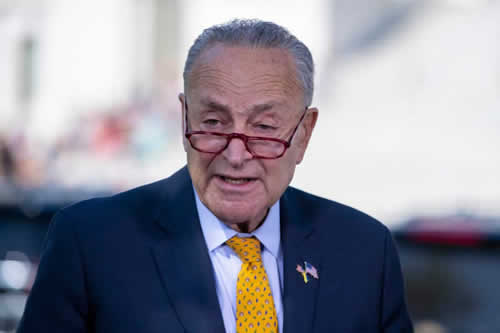 The legislation, known as the Luke and Alex School Safety Act, would require the Department of Homeland Security to establish a clearinghouse on the best school safety practices after consulting with education, justice, and health officials.

“It’s pretty simple. It just creates a clearinghouse of information of the best practices for school safety. It ensures that parents, teachers, school officials, and other stakeholders have input into what those best practices are. It doesn’t allow the clearinghouse to mandate any school to take any certain action. Maybe most importantly, it publishes the available grant programs and federal resources available for school safety,” Sen. Ron Johnson (R-Wis.) said on the Senate floor in Washington.

The bill is named for Luke Hoyer and Alex Schachter, who were both killed when a man with a gun opened fire at Marjory Stoneman Douglas High School in Florida in 2018. It’s backed by the parents of the boys.

“It’s a good idea. It could save lives. It is an action, when people are calling for action following this tragedy,” Johnson said.

He asked for unanimous consent for the legislation. That enables a bill to pass with no recorded vote, but also opens up the possibility that a single senator could block the request.

Schumer blocked it, referencing the mass shooting that took place this week in Uvalde, Texas.

The “sad truth” about that shooting is that “hardening schools,” or ramping up prevention techniques and strategies, “would have done nothing to prevent” the shooting, Schumer said.

“In fact, there were guards and police officers already at the school yesterday when the shooter showed up. One was a school police officer, two were from the Uvalde Police Department. The shooter got past all of them, with two assault weapons that he purchased. They couldn’t stop him,” Schumer said. “The bill would not have protected those children. More guns won’t protect our children. That is the wrong answer.”

He said he was open to adding the bill’s language as an amendment to a bill he supports, but only if Republicans voted for it.

Johnson responded, saying that he would “not engage in partisanship, other than to say it is just sad.”

“It is just sad that this body can’t pass this bill, when about a month ago, they passed an identical bill that applied to churches. This one applies to schools, and yet it’s inappropriate, according to the majority leader, to pass this nonpartisan bill by unanimous consent,” he said.

The Senate is in negotiations on different measures regarding guns, but with its 50–50 divide between Republicans and Democrats, few of them, if any, are expected to be approved.

Max Schachter, Alex’s father, denounced the blocking of the bill.

“I hoped after 21 were murdered in Uvalde, partisan politics would be put aside,” he wrote on Twitter. “I WAS WRONG.”